US liquefied natural gas exports are facing fierce competition from France to acquire most of the shipments among European and Asian competitors, despite Paris’ complaint about its high prices. A monthly report issued by the US Department of Energy showed that France acquired the largest amount of US exports during the month of October (2022), according to the LNG Prime platform. The volume of quantities that France purchased from the United States during this month amounted to approximately 48.9 billion cubic feet of liquefied natural gas. This made it the first in Europe and the world, according to what was monitored by the specialized energy platform.

France was also the first destination for US liquefied gas exports for 5 consecutive months, including the month of August 2022, in which it ceded the lead to the Netherlands. European demand for US LNG has been increasing since the outbreak of the Russian-Ukrainian war in February 2022. The United States pledged to compensate Europe for part of the huge Russian gas supplies that were stopped by a Russian political decision in the first 6 months of the war, and then due to unknown explosions of Nord Stream lines at the end of September 2022. The report of the US Department of Energy showed an increase in US exports of liquefied gas to 309.4 billion cubic feet during the month of October, an increase of 4.9% over the previous month, and 3.9% over the comparable month of last year.

The number of shipments to US stations during October reached approximately 97 shipments of liquefied natural gas, compared to 98 shipments in the previous month, and 94 shipments in October 2021. The Cheniere Sabine Bass plant accounted for most of the exported shipments in October, with an average of 38 shipments, followed by the Corpus Christi terminal, with a rate of 20 shipments. The Cameron terminal also exported 37 shipments, while Elba Island exported only two of the total shipments for the month of October, according to the report. Cove Point LNG also did not ship any cargoes due to ongoing maintenance work at its terminal, while the Freeport terminal has remained closed since the June 8, 2022 accident. The average price weighted by export terminal was $13.78 per million BTUs in October 2022.

The US Department’s report showed that the United States exported 4,051 shipments of liquefied gas in approximately 4 years, specifically from February 2016 to October 2022. The combined volume of these shipments amounted to approximately 1.29 trillion cubic feet of LNG, and they were exported to 42 countries around the world. Major Asian importers acquired the largest share of US liquefied gas exports during this period, as South Korea came in the lead by purchasing 842 shipments, followed by Japan with 346 shipments, then Spain with 317 shipments, and then China with 282 shipments during the past 4 years until October 2022. Six other countries also come in the list of the top 10 importers of US gas during the past 4 years, namely: France, the United Kingdom, the Netherlands, Brazil, India and Mexico.

The United States is trying to favor its European friends over Asian countries, as part of its pledge to support their steadfastness in the face of Russian pressure, but it provides them with liquefied gas at double prices, which has been criticized, especially by France, the largest importer. On October 29, 2022, French President Emmanuel Macron complained about the rise in US gas prices, describing it as inconsistent with the principles of brotherhood and feelings of solidarity in light of the crisis. Russian President Vladimir Putin also accused his US counterpart, Joe Biden, of exploiting the Ukrainian crisis to profit from the Europeans by selling gas at double prices. Experts fear that the United States will not be able to continue to compensate for the growing European deficit during the next summer (2023), due to pressures on domestic demand and continuous outages at the Freeport terminal project in Texas, the second largest American exporter of liquefied natural gas. 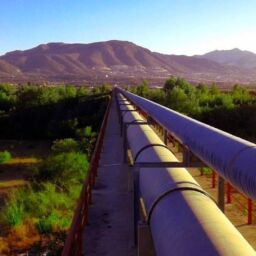 Recently, Spain, Portugal, and France unveiled the first details of the H2Med pipeline, formerly known as BarMar, which will pass…